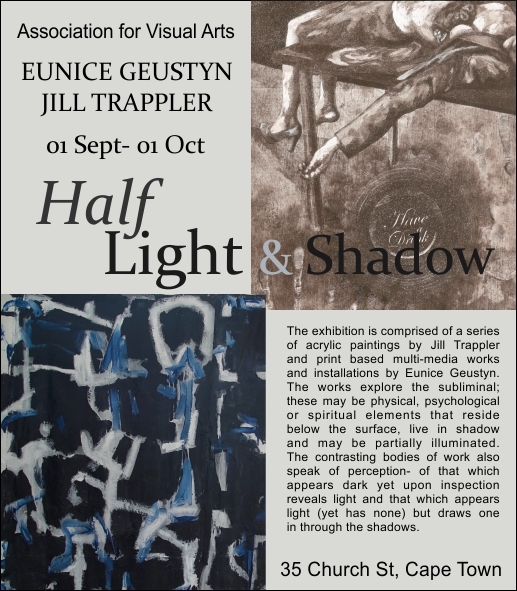 The paintings for the exhibition at AVA, “Half light and shadow” are from an ongoing series, “weaving and unwoven”.

The images are made on canvas with acrylic paint and various media and are found in scribbling, drawing, dripping, pouring, layering, scratching, polishing and painting. They are tracked into the surface and found in the pigment and handwork. Like an archaeologist finds bones and fossils in the rock and earth, the images are found in the surfaces laid down in the specific scale of format and cloth. The grids of line and colour are built as thread is on a loom; however, with water based paint the movement allows for both “warp and weft”, horizontals and verticals, to be placed at the same time. The paint responds to the media used in priming or preparing the cloth. The images are built by securing a structured scaffolding of drawing in order for the colour to be used easily, to play and move the eye into various narratives. The limited colour and use of extending tonal values slows the process and draws on the imagination. The process is meditative, slow and is depended on time spent making and looking, seeing and thinking. The world of shadow is one of transition where one may see more in the half light or twilight than one does when confronted with sharp colour and commentary. These paintings may feel unnerving but they are not violent and do not carry fear. The images invite you into a quiet place which is usually avoided because of stirrings and arousals as in dreams, memories, reflections! It is in this zone that changes in awareness and thinking can take place. By mobilizing our imagination, we mobilize ourselves.

The reference to “weaving and unwoven” is from the book H is for Hawk by Helen MacDonald and comes from a manuscript by T H White, King Arthur in the cottage. This is a reference to initiation ceremony.

Paintings have a parallel for me with Initiation ceremonies; each painting is a new beginning. This reference is also used in the work that will be at the Irma Stern gallery in October 2016. “Unfolding into spring”. Spring is the entrance to another year, a time of initiation, of waking again into the warmth of the sun after a quieter and internalised winter. The work for the Irma Stern show is based in a poem by Rudyard Kipling, “the feet of young men” and refers to the Valley of the red gods. This is place on top of Table Mountain that carries a stillness that I try to bring into my paintings. Another reference would be Michael Fried’s essay on that idea of “Presentness” that some painting is able to achieve.

These new images have reference to previous work and move forward with a fresh pace and commitment to painting and object making.