The two works titled ‘Cosmos 1’ and ‘Cosmos 2’ come from the large body of work:  ‘Unfolding Her’. In this series of mixed media works I looked at the personal and the collective in each image. To elaborate; I tried to make sense of bringing the intimate and the unknown (or unfamiliar) together. In this process I am unfolding from a microcosm, which is an object that I have lived with and know to exploring the macrocosm, which is the mystery of where it comes from and the journey it has been through. In these two works I use a very personal and intimate object, a handkerchief, as well as a cherished and domestic object, a finely handmade cloth. I placed them specifically with surfaces, colors and marks that describe this experience further.

The cosmos has order although this order is tricky to plot. Patterns emerge within the cosmos that connect the microcosm and the macrocosm therefore creating a time and place for family lineages and histories.

In some cultures it is significant, if possible, to return the remains or ashes of a person to the place where they were born. This process incorporates aspects of the feminine principle in that it involves the cycle of receiving, revealing, restoring and returning.

I am grateful to the British Museum for accepting the work ‘Cosmos 2’. By sending an object that was dear to my family I am able to find a resting place in a journey; make an invisible circle in the cosmos and perhaps fulfill a ritual. 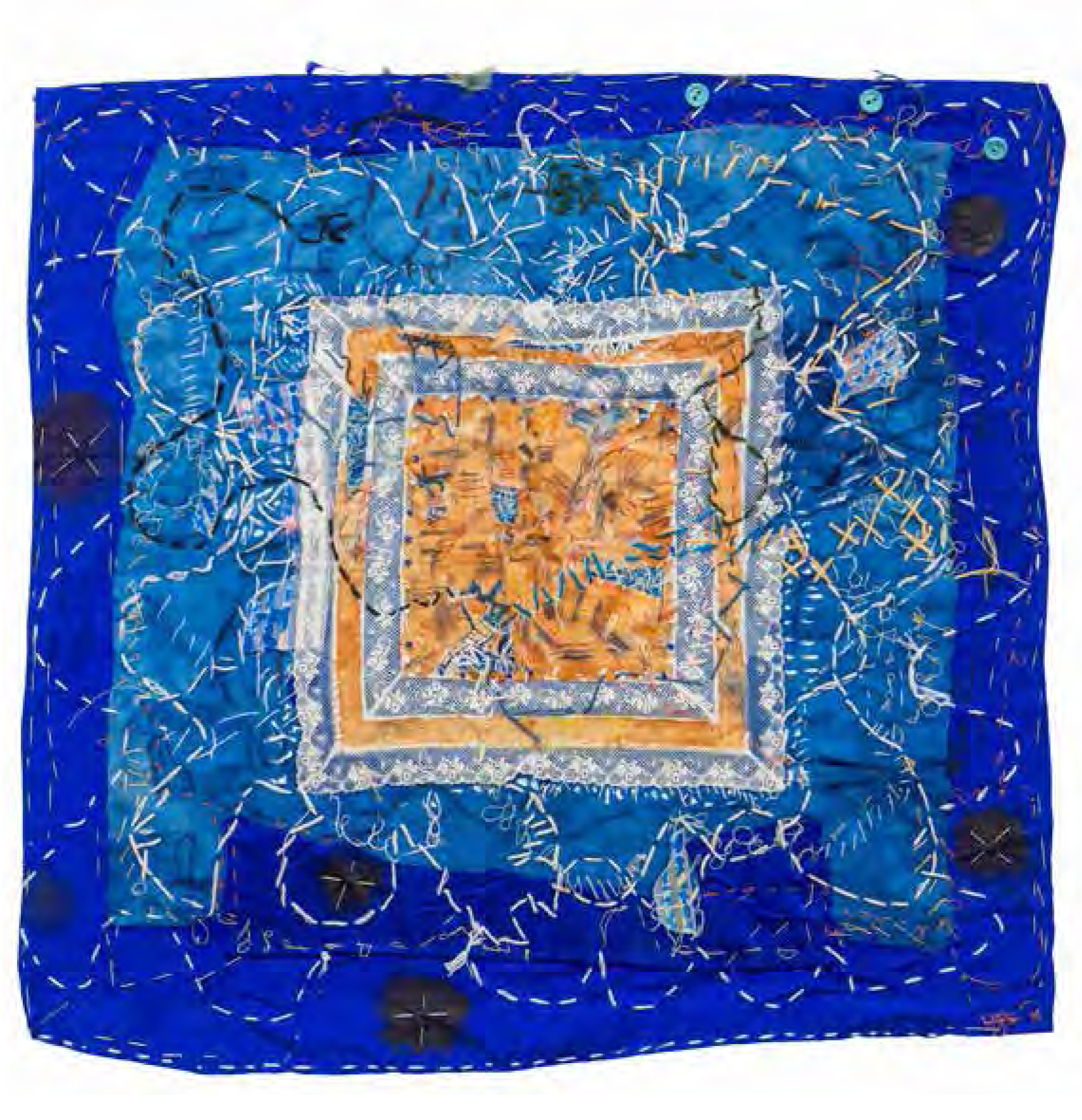 The central piece is a hankie, which belonged to my great grandmother. Mary Ambler Sykes (“Little Grannie”) visited South Africa from the UK with her two daughters in the early 1920’s as her son was farming there. His farm was outside the Karoo town of Carnarvon. A few years later this would be where my grandparents lived and farmed and where my mother was born. “ Little Grannie” was born in Halifax and attended boarding school in Eastward. She studied the violin in Leipzig and married Arnold Walker Sykes. She spent her married life with 3 children in Huddersfield where she and her husband held musical evenings in their home. Her husband died in Ypres during the 1st World War. As a widow she lived with her daughter in Huddersfield or her daughter in South Africa spending a year at a time in each country. Little Grannie spent the war years in South Africa with Kathleen, the younger daughter (my grandmother) while her son was a prisoner of war in Germany for many years. For the remainder of her life she travelled to and from South Africa by air. In fact, she travelled on the first “flying boat” from England to South Africa. She died in South Africa at the age of 92 having spent the last 8 years of her life living in my Grandmother Kathleen’s home in Benoni. I knew Mary when I was very young and have a clear image of her as a “very old Lady”. She dressed formally, with her long hair braided and wound around her head. She was a soft person and always carried a white hankie tucked into her bodice with the lace showing. I colored the cotton amber as that is the colour that brings her closer to me. 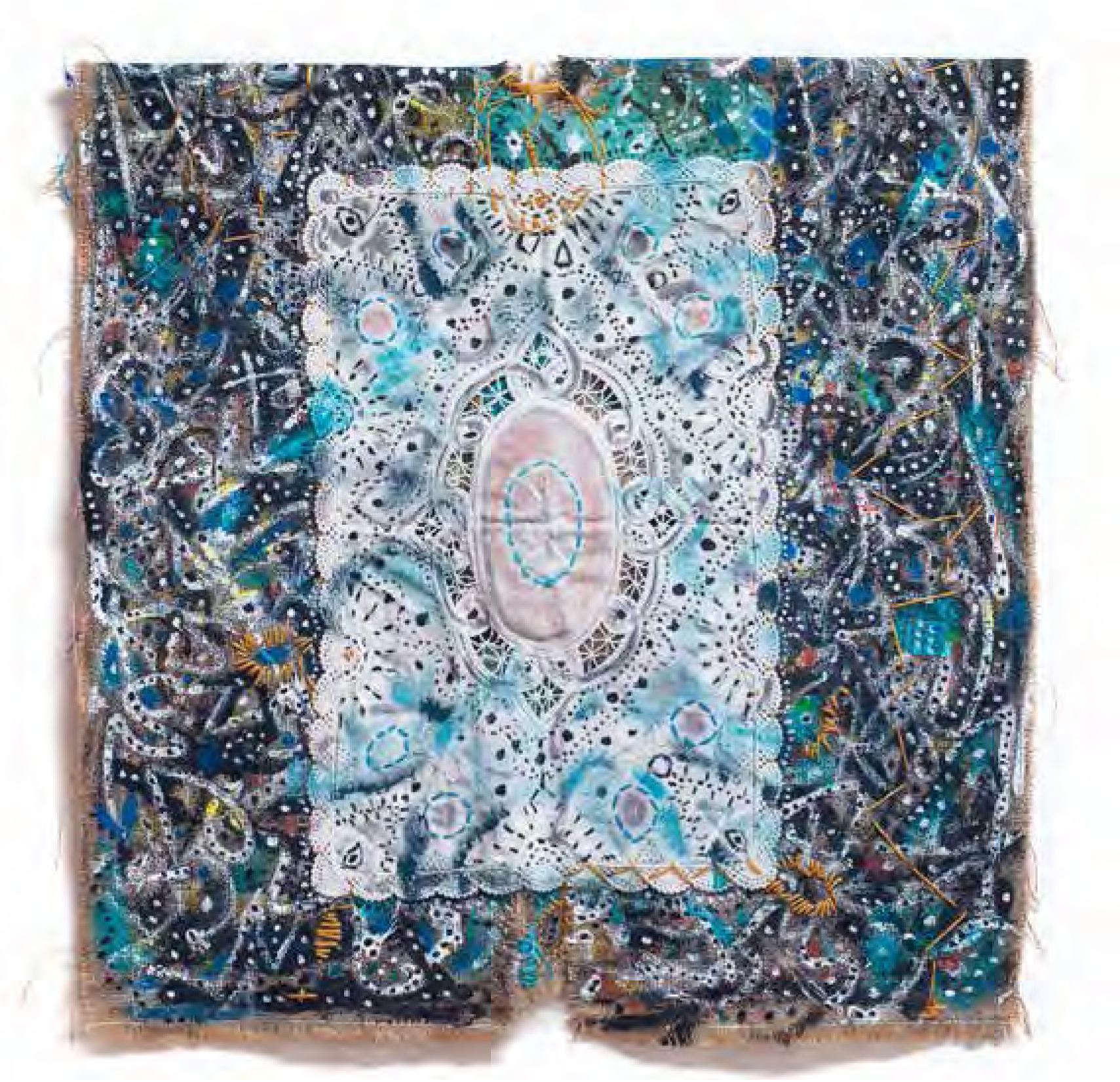 The central piece of tatting is from my husband’s family through his paternal grandmother Leah Newman who was born in Leeds, UK in the late 1890’s. She came to Cape Town with her five sisters at a young age. Maurice Trappler (born in London) around 1890, worked as a young man on the railways in Rhodesia (modern day Zimbabwe) then moved to Cape Town where he met Leah. He worked as a grocer before joining the British forces serving in East Africa. He returned to marry Leah in Cape Town but settled for a time in Bulawayo, Zimbabwe where my father in law Leon Trappler was born in 1926. They returned to live in Cape Town when Leon, their only child started a business degree at the University of Cape Town. He married Marie Block and their second son is my husband, David Trappler.

The Hessian sackcloth is visceral and practical and complements the decorative, soft, cotton tatting. It brings the feminine into the home and adds to my sense of necessity for place, ritual or tradition, even if it is nomadic and trans-generational in nature.