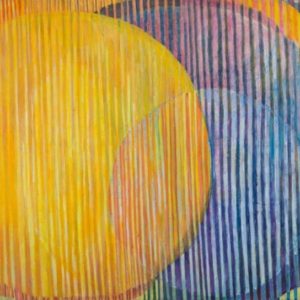 An exhibition of images by Jill Trappler.

In this exhibition of water colours, clay sculptures and oil paintings, Jill Trappler explores the links between the possible and impossible, the visible and invisible, the specific and the universal, linking the image, the viewer, and the artist into the same space.

The vessel that carries her imagination is the simple makoro canoe. In a fleet of these little ships, she takes the viewer on a voyage through a universe of unknown territories – desserts and deltas, and tree tops and skies – she lets us float within and beyond reality, into a landscape of memory and dreams.

The makoro is also a metaphor for the way the eye sees and the mind interrupts, linking thought, feeling, and intuition, allowing the viewer to expand and explore the visual narrative.

In her large paintings, Trappler removes the physical boats and asks us to become the vessels themselves, supported by the rhythmic power of the moving water. Different rhythms are set by mark and line in such a way that we can feel the silence, a beat or vibration. A dance between the viewer and the work is set in motion as the painted water resonates with the pulse of reflected moonlight.

The carved clay boats are totemic. As tactile objects, they can be held in the hand and rubbed, while the eye is lost in the mysteries of the Raku glaze. These little boats draw us into Jill Trappler’s imagination, a universe full of curiosity and variety. With humour and humanity, she plays with the contradiction of the tangible and intangible, made clear by the reflection of the far-away moon on a watery inconstant world ruled by the invisible push and pull of the tide.

The Spin street gallery is a large excitingly proportioned space with exceptionally high ceilings and arched windows. Although vast, it is a comfortable and containing space, where the fleet of mokoro’s are at home to carry the artist and the viewer on a voyage through the vibrant shapes, colours and rhythms of Jill Trappler’s waterscapes.

Margie Murgatroyd will curate the work and the space.